The purchase of solar lamps was organised and funded by the newly formed Gemfields Foundation, the charitable arm of Gemfields, through which donors can contribute funding to directly support community and conservation projects in Africa. 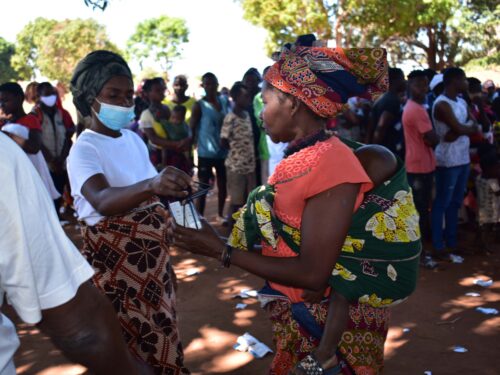 The first ceremony handing over lamps to families took place at a ceremony in Nanhupo B, attended by the District Director of Planning and Infrastructure and a representative of the Namanhumbir Administrative Post. Over 500 families received two lamps each, and ceremonies of this kind will be replicated until all 4,000 lamps have been distributed.

Gemfields, MRM and the Gemfields Foundation continue to work with the government on new initiatives to provide even greater support to internally displaced people in Mozambique. Since launching last January, the charitable arm of Gemfields has made a tangible difference to families living in Africa.

It’s safe to say this year was a busy one! As 2021 draws to a close, we look back at some of the biggest moments of the year for Gemfields.

Coloured gemstones add vibrancy and personality to any outfit, but where to start when it comes to styling?

Gemfields is delighted to promote the largest collection of Zambian emeralds ever to be offered at auction. Comprising over 45 lots, the collection – hosted by Phillips – includes 993 carats of breathtaking fine Zambian emerald gemstones.

The owner of the largest collection of Zambian emeralds ever to be offered at auction has, unsurprisingly, a wealth of expertise when it comes to selecting and purchasing the very best emeralds.

As a co-founding member of the Coloured Gemstones Working Group (CGWG), Gemfields is pleased to announce the launch of “Ancient crafts, modern challenges”.

Colour on the carpet: No Time To Die world premiere

Gemfields Foundation starts construction of a primary school in Madagascar

Gemfields Foundation has received generous funding from Sandy Leong Jewelry and a private donor, and combined these with existing unrestricted funds in order to progress works on a Madagascan primary school from July 2021. The timing of the project is critical, as the school must be ready for classes to start in September!